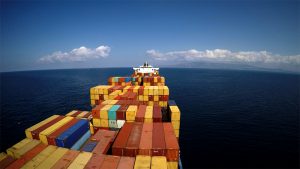 The more hidden a problem is, the more urgent it is to solve that problem.

Once in a while my The Marin Post editor discovers a documentary film and informs me about it. This one is about shipping—giant ships bringing products to and fro for us to utilize and consume. ‘What a seemingly dry and obscure topic’ was my immediate reaction.

It took only a few moments watching the film to realize it is as crucial a documentary for us humans to see as any of the many environmental films that keep on coming our way.

Written and directed by Denis Delestrac, Freightened opens with metadata about these giant cargo ships which bring 90% of the products we consume to the West. The rest of the film is…let’s just say concerning.

Shipping is a 500 billion dollar industry. There are sixty thousand giant ships roaming our oceans, polluting our natural world. There are approximately 120 shipwrecks a year. 150 tons of crude oil pollute the oceans annually. Add other substances, 1.8 million tons of toxic substances feed our oceans annually. This is just a sample of the film’s revelations.

The primary culprit is called ‘flags of convenience.’ No matter the actual country of origin of any one ship, it can be registered with any United Nations country, and each country creates its own regulations which can be strict and protective, or not. Many, if not most ships fly flags of countries that provide minimum—if any—protection via their regulations.

Freightened may seem to be a most unlikely documentary you find yourself viewing, yet it is as significant an environmental film as I have ever seen—and I’ve seen a lot.

The film is available in Amazon Prime, and available on disc via Polar Star Films.

Coda: What’s in those cargo containers coming our way? With a few exceptions, the answer is a mystery of the seas.