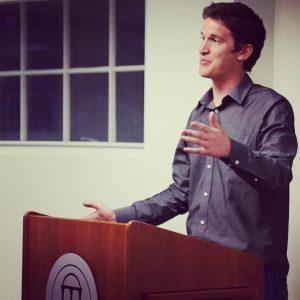 It was 1981. I was in my early 30s, and had a full-time job. Although this was the prime of my life, I found myself crawling around my apartment after work—weak and tired. Unlike the above sufferer, I was lucky. My chiropractor was skilled in the use of nutritional supplements. After a few weeks of taking pills from 9 bottles of various supplements my energy began to gradually return.

Produced and directed by Ryan Prior and Nicole Castillo, Forgotten Plague is a much-needed examination of the mysterious, devastating illness called chronic fatigue syndrome or myalgic encephalomyelitis—ME/CFS for short.

This illness continues to ravage the lives of countless millions of people around the world. For decades our medical industrial complex did everything it could to deny the existence of this illness, or to diminish its effects on humans, and its impact on society.

Prior is the film’s host. In addition to those of several interviewees, he tells—and shows—his own harrowing story of suffering from and struggling with ME/CFS. His story, of course, had a happy resolution. He is having a distinguished, well-lauded career as a journalist, and has given us this powerful film.

In a short 80 minutes Forgotten Plague presents heart-rending interviews with sufferers, and crucial information about the realities of this disease. The information that struck yours truly the most was that although the costs of resources lost due to Parkinson’s and ME/CFS are nearly equal, the amount of resources given to research into ME/CFS is negligible compared to those given to Parkinson’s.

Although the film covers current research, efforts to draw attention to the disease, and concludes on a hopeful note about potential scientific advances in research, the film’s point is simple. People are still suffering, lives are being destroyed, and mainstream American society continues to ignore the tragedy.

Like so many compelling documentary films, Forgotten Plague is a call to action. The filmmakers suggest a starting point: #MEAction

I heartily suggest you remember, and see this film which I found on Amazon and Amazon Prime.

On a personal note, I wish there had been some mention in the film of a little-known—to doctors, at least—off-label treatment, Low Dose Naltrexone (LDN) that has helped many people with ME/CFS. In our soon-to-be published book, The Power of Honest Medicine, Julia Schopick and I include contributions from three ME/CFS patients who were helped by LDN. There is even a Facebook group, with nearly 3,000 members, devoted to LDN’s use for ME/CFS.

Note: When clicking on one of the film’s links above, you may find yourself having to click a second time to access the site. It seems to be a random error.