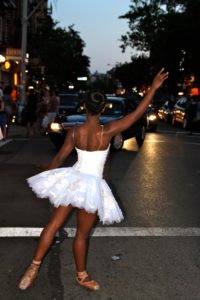 Aran, Rebecca, Jules, Michaela, Joan, and Miko are the six dancers producer/director Bess Kargman follows to the completion of a year’s competition—out of the thousands who initially auditioned. Aran, Jules, and Joan are males. (Joan is from Columbia.)

Kargman’s camera flies around the world capturing the stories of the dancers and their families. Michaela’s, 14 at the time, is the most astonishing. She was born into civil war in Sierra Leone, in west Africa, and witnessed the ubiquitous horrors. Her parents were killed. Michaela and her sister Mia were adopted by an American couple.

This thoroughly engaging documentary is Kargman’s first feature. Her film seems the work of a seasoned veteran. The ending has the dramatic tension of a Hollywood thriller, and the dancing, of course, is spectacular.

I found First Position on Netflix. You can also find it on Amazon.