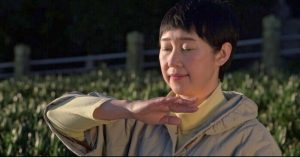 Finding Courage is Kay Rubacek’s first feature documentary. Although first, the film is clearly the work of a seasoned professional.

In 1999, the Chinese Communist Party ordered the eradication of a meditation practice called Falun Gong or Falun Dafa. People in China are disallowed to talk about this practice. Since that gag order, the Communist Party has carried out more than 50 persecution campaigns against Falun Gong—detaining, torturing, and killing countless numbers of Chinese citizens. How many deaths attributable to the nation’s actions will never be known, but the death count is likely in the tens of thousands—possibly more. Then, of course, it is also not publicly known how many Chinese citizens have been or are currently imprisoned and/or tortured.

Rubacek’s film covers China’s unending, apparently successful attempts to quash the spiritual practice of Falun Gong (a.k.a. Falun Dafa) in that nation. Rubacek interviews several Chinese expatriate officials, yet the overarching story is told by Yifei Wang, a former journalist for the Chinese Communist Party. Wang tells her personal story, the story of China’s persecutions, and the intimate family tragedy of Wang’s sister, Kefei Wang, who was tortured and killed for refusing to stop her Falun Gong practice and allegiance.

Yifei wanted closure of the tragic loss of her sister. The film covers Yifei’s attempts to at least recover her sister’s body. She and others made a daring attempt to do so—at great peril to all concerned. After many efforts Yifei and her team were at least allowed to see Kefei’s body, and they also snuck in pictures of Kefie.

Yifei’s activism is nonstop, and she eventually brought herself and a large group of Falun Gong practitioners to a rally she presided over at the United States Capitol Grounds on a bright, sunny day.

China has the largest population of people in the world. Its government is an autocracy. The nation’s economic boon is attributed to the United States and many other nations utilizing China’s labor force for manufacturing. That boon has allowed the nation to widely expand its infrastructures, develop a space program, and vastly increase its military—including, of course, nuclear weapons. With respect to China, the word, ‘Communist’ has no significant meaning to yours truly. Their citizens have been hypnotized by the material wealth now available to these citizens. These same citizens are also subject to massive security efforts protecting the government from any citizen activism that threatens the current deeply entrenched regime—which is all to say it would likely take a global catastrophe to shake off this government’s golden stranglehold on its people.

Yet, as Rubacek has demonstrated, there are nonstop efforts to change the status quo in the upper echelons of China’s government. Irrespective of the chances to see significant reform towards citizen rights, this is the definitive ‘good fight.’

Produced and distributed by Swoop Films, Finding Courage is the winner of at least 7 film festivals, and was an ‘Official Selection’ of 20 film festivals. Viewers may find the film at the Swoop Films website.