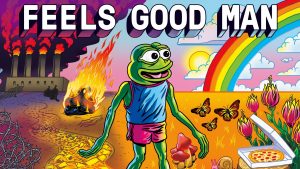 meme: 1. an element of a culture or system of behavior that may be considered to be passed from one individual to another by non-genetic means, especially imitation. 2. a humorous image, video, piece of text, etc., that is copied (often with slight variations) and spread rapidly by Internet users.

zine: a small-circulation, self-published work of original or appropriated texts and images. Zines are the product of either a single person or of a very small group.

In 2005, artist and cartoonist Matt Furie created a comic called Play Time which initially featured two characters Brett and Pepe the Frog (Furie has always had an affinity for images of frogs). He added two more characters, and published them in a zine called Boy’s Club which initially appeared in My Space. Although Furie did not know what a ‘meme’ was. Images of Pepe quickly turned into one.

People started sending Furie emails with links to images of their own vision of Pepe. His friends suggested he lawyer-up to protect Pepe’s images and Furie’s rights, but the soft-spoken artist saw no need of such—until the Alt-right world claimed Pepe for their own, and our dear sweet frog became a symbol of hate and racism around the world.

Arthur Jones’ Feels Good Man tells Furie’s story of the appropriation of Pepe, and of Furie’s eventual fight to save the massively sullied image of our dear frog.

This is an incredible, instantly engaging film. Despite having next to no awareness of the cultural subjects Jones covers, I was immediately drawn into this strange new world with its all too pedestrian conflict.

Feels Good Man is Jones’ first feature film, and he has knocked the ball out of the park. This is one of the most memorable documentary film I’ve seen, and I fully recommend seeing this finely produced jaw-dropping story. You won’t forget it.