Written, produced, and directed by Mark Brian Smith, Fear No Fruit begins and ends as a celebration of Frieda Caplan who broke gender barriers and changed America’s culinary habits throughout her decades-long career as a wholesale distributor of fruits and vegetables. 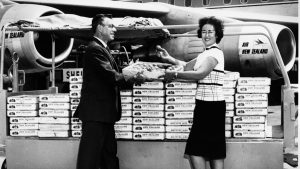 In-between Caplan’s story we learn about the worlds of produce growing and marketing, as well as endeavors to improve the dismal diets of the American people—especially our children.

But, Caplan is the well-deserved star. A young wife and mother, Caplan accidentally slipped into southern California’s wholesale produce distribution industry—the first woman to do so. Her two daughters joined the business now known as Frieda’s, Inc. As they and their mother aged, the two became the company’s controllers.

Caplan’s success was sparked and established when she first began distributing fresh mushrooms which was considered a ‘specialty’ at that time; and specialty fruits and vegetables became her specialty. The hit that propelled Caplan’s fame into the stratosphere of wholesale produce marketing was her 1962 import and marketing of what we now call kiwi fruit. Her forever moniker became ‘The Kiwi Queen.’

Caplan and her company became well-known throughout southern California, and her impact on America’s culinary habits is celebrated nationally.

As of the film’s production, in 2014, Frieda was still working for her daughter’s company five days a week—at the age of 91. Grandchildren, too, have joined the company.

With a very small budget and 10-day shoot, Smith provides a thoroughly engaging and entertaining biography of a quietly charismatic innovator as well as an introduction to the much-needed marketing of fruits and vegetables.