With 2010’s Fat, Sick, and Nearly Dead Cross introduced his story-line of a successful Australian businessman who is overweight, suffering from an auto-immune disease and its attendant pharmaceuticals, and cruisin’ for a heart attack. He decides to go on a stint of 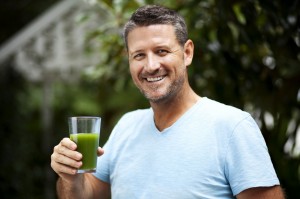 consuming only freshly-juiced fruits and vegetables, gets better, goes to America, crosses the land juicing and talking to people about same – with a professional documentary crew in tow.

With “2” Cross obeys the unwritten sequel dictum that the follow-up film must be bigger, Cross travels the world on another campaign to extol the virtues of healthy eating.

In addition to covering much more territory, Cross proffers more people who have experienced dramatic improvements in their health via juicing. He also addresses those who saw and responded to his previous film some of whom have fallen off the wagon, or are back-sliding health nuts. For us, he suggests the “Reboot” – simply put, start eating healthy again.

Cross interviews physicians who provide vital information in support of eating healthy. He also covers the social-psychology that impacts our health-related choices. In that light, we learn of and see community initiatives to grow organic foods for local consumption.

Given this larger canvas with more colors and figures, “FSaND2” is a more important, more compelling, more down-to-earth, and more influential film.

All dinning on a Western diet of high-sugar, high-fat, high-salt, high-meat, and processed foods who see this film will, at the very least, take pause.