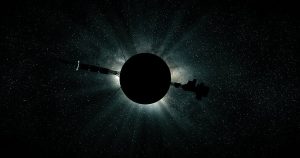 Prologue: It is rare that I play a movie at home and not press pause. I did not press pause, nor avert my attention as I watched Emer Reynolds’ The Farthest—his feature documentary about the Voyager missions through our solar system, and the first penetration into interstellar space by human-created objects.
_______________________

Key participants in the Voyager program tell the story of building the vehicles, and their controlled wanderings through our solar system. There are several points in the interviews where some interviewees come to tears as they tell their story. They are deeply moved by the raw fact that human beings and some of our creations have left the Earth. As The Farthest tells its story with voices and images, that feeling of awe, of overwhelm, of humility deepens—for the interviewees and us viewers.

Near film’s beginning, one of the interviewees relates that as the Voyager program was initiated, and the craft were being built, the public’s attention was diverted from the craft and their journey to something called The Golden Record —a phonograph record of music, voices and images—placed on each of the two craft. The story of that recording is worthy of its own documentary film.

Coda: Soon after the film began flowing on my television screen, I was reminded of The Inner Light—an episode from the ‘Star Trek: The Next Generation’ series. In it, Enterprise Captain Jean Luc Picard collapses unconscious on the bridge. As his crew attempt to revive him, he lives another lifetime as another person, on another planet. The planet’s sun is on the verge of going nova. The advanced civilization orchestrated this mental kidnapping of Captain Picard in order to have at least one entity in the multiverse remember their existence, their being, their world.

There are two or three oblique references in The Farthest to the environmental degradation of Earth by human beings. It is clear that our ignorance, greed, and carelessness has done and continues to cause irreversible damage to our ecosphere. The only question is the scale of impact this damage will eventually create. But, we can peacefully rest in the knowledge that somewhere in the multiverse, human-created radio waves and space craft may be found, and that someone will note our brief existence.