Directed and shot by Henry Corra and Reggie Nicholson, the documentary film Farewell to Hollywood tells the story of Reggie Nicholson’s last two years on Earth as she struggles with the horrors of cancer and its treatments, and her parents’ inability to deal with their daughter’s adolescence—let alone her disease. 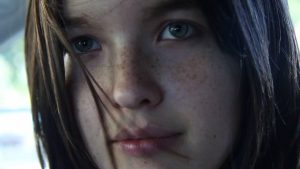 This is a deeply profound film, as disturbing as it is inspiring. I am grateful for the opportunity to have seen it.

This is Corra’s formal statement about their film:

“When I met 17-year-old filmmaker Regina Nicholson at a film festival nearly three years ago and heard her sad story, I vowed to help her make a film about her short life. Reggie was an obsessive cinephile who was battling a terminal illness and whose mission in life was to make one feature movie before she died. What developed over nearly two years is a powerful friendship and poignant relationship between Reggie and me. I became her collaborator, friend and defender in her fight to find artistic and personal freedom. The film oscillates between the brutal realities of her daily life and the magical films swirling inside her head, as it chronicles Reggie’s struggles to realize her dream, while her choices—and days—become fewer and fewer. It’s a raw and unexpected story about the commitment of the two of us to art, poetry, care and the potential beauty of every moment together, to the very end.”