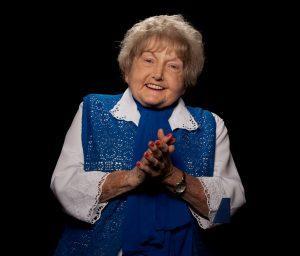 “We often think of infectious diseases, but there’s also infection virtues where somebody’s life actually becomes infectious, and you can’t be with her, or see what she’s about without thinking ‘maybe the human race has more hope for the future than we thought.’”
L. Gregory ‘Greg’ Jones

Masterfully written and directed by Ted Green, Eva: A-7063 tells the epic story of Eva Mozes Kor (January 31, 1934 – July 4, 2019)—a Holocaust survivor who came to national and international prominence by garnering both controversy and eminence through her steadfast Holocaust activism.

The root of her controversy was a seemingly simple personal act: She forgave, for herself, all the Nazis, and then publicly advocated other survivors to do the same.

Although the resentment she faced was inevitable, that controversy is a short chapter in this thoroughly engaging and stunning film. Eva Kor’s act of forgiveness inspired countless survivors of horrendous acts around the world to make choices to forgive, and to heal.

In 1995, Eva Kors created and opened the CANDLES Holocaust Museum and Education Center in her adopted hometown of Terre Haute, Indiana, with the mission ‘to prevent prejudice and hatred through education about the Holocaust.’

I cannot overstate the power and significance of Eva: A-7063. It is an inspiring must-see documentary which can be found streaming on Amazon Prime, Roku, and AppleTV.

“Eva is more than just a story. Eva is a revelation about what’s possible in the human condition.”
Elliott Gould