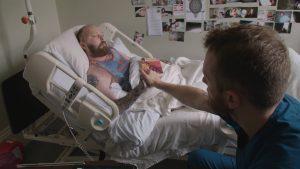 The film features physicians BJ Miller, Steve Pantilat and Giovanni Elia who appear throughout the film working with patients, and speaking of the philosophy behind their emerging approach. The film highlights a team approach to care including physicians, nurses, social workers, and chaplains. By film’s conclusion we have experienced what compassionate care looks and feels like.