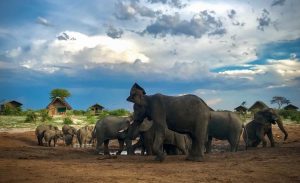 The title says it all in Louise Hogarth’s Elephant Refugees.

The film covers a lodge called Elephant Sands located in Africa’s dry, sandy, Kalahari woodlands of eastern Botswana. Created by founders Marie and Ben Moller in 2002, the lodge is dedicated to the care and feeding of wild African elephants under the duress of drought.

Starting in 2014, Botswana became the only southern African nation that disallowed elephant hunting. Elephants quickly learned this was the place to be. This change coupled with the global-warming-caused draught turned Elephant Sands into a challenging—to make an understatement—ongoing project.

As of the film’s making, the most difficult challenge was securing water for the elephants. The problem was exacerbated by the five years of migration to Botswana. As of filming, 60% of Africa’s elephants were in Botswana. I would not be surprised if that figure is higher now. Sadly, though, after five years of freedom from hunters, Botswana reinstituted the legalization of elephant hunting.

In any case, the family and their crew have weathered every difficulty and crisis they have faced in supporting elephants and in growing the lodge. I attempted to learn more about what’s happening now by emailing the lodge, but did not receive a response. In any case, the lodge is doing well as far as I can tell.

Elephant Refugees is a lesson in perseverance, dedication and love. The film won the Best Documentary Jury Award at the 2020 Sonoma Film Festival, and was an Official Selection of at least three other festivals.