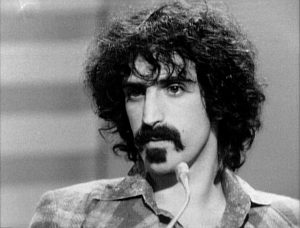 Eat That Question is an introduction to the professional life and philosophy of legendary composer/musician/filmmaker Frank Zappa.

Zappa is smoking a cigarette in some—if not most—of his interviews. As a fan I was devastated to learn of his untimely illness and death. I still am.

Distributed in the United States by Sony Pictures Classics, but not available from the company’s website, Eat That Question is a must-have for Zappa fans, and a quintessential introduction to the man and his work.