Initially cablecast by HBO, Earth Made of Glass opens with a quote by Ralph Waldo Emerson: “There is no den in the wide world to hide a rogue. Commit a crime and the earth is made of glass.” 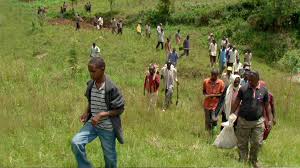 The rogue here is France, which this film states was complicit in the 1994 genocide in Rwanda, in which one million people were killed.

Co-written, co-produced, and directed by Deborah Scranton, the film tells stories of the genocide and its aftermath. The most intimately dramatic is that of Jean Pierre Sagahutu who lost both parents and all seven siblings in the slaughter. He survived by living for more than two months in a septic tank.

The film follows Sagahutu’s deeply committed 15-year search for the murderers, location, and nature of death of his father who was a beloved physician in the region.

Paul Kagame was a high-ranking officer in the forces that eventually triumphed over the on-the-ground perpetrators. He became President of Rwanda, and in 2008 released a report providing evidence of France’s involvement. After that exposé, Rose Kabuye, Kagame’s closest aid, was arrested and detained on a French warrant during a diplomatic mission in Europe – the incident was designed as a distraction from and a recrimination for Kagame’s report.

Kagame presided over a reconciliation between the opposing forces as well as the reinstatement of normal relations between Rwanda and France, under Nicolas Sarkozy’s leadership at the time.

The film concludes with Rwanda in a new balance, and Sagahutu – and the filmmakers – projecting an environment of hope and promise. I’m left concerned about the apparent lack of accountability for France’s involvement – a paucity that permeates the conduct of nations.

But I wonder, what do we do when the whole wide world is a rogue?

Please note that the link below leads to a sales site for the film, but no other information.