“The United States has become a national security state whose raisin d’etre is war. We’ve created a terrorist-industrial complex that is self-perpetuating, and now—searching for the reason for this constant state of war—terrorism is the perfect case for us. We can do this forever.” 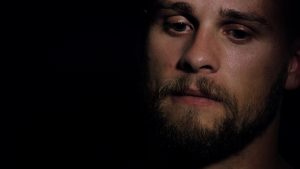 Written and directed by Tonje Hessen Schei, DRONE tells and shows us what many have learned or surmised—that countless innocent civilians have been and are being killed by United States military actions. In addition to the tragic loss of life, Schei expands the film’s scope with interviews of authorities and experts on the military use of drones—including a projected vision of warfare by autonomous devices.

Former drone operator Brandon Bryant (pictured) opens the film speaking of the painful emotions he has experienced subsequent to his service. He is haunted by the cognizance that he participated in the killing of innocent human beings. Bryant’s interview is peppered throughout the film concluding with his testimony at the United Nations.

Schei includes a brief outline of the history of drone deployment for military purposes, but the film’s central focus is the killing of civilians in Pakistan. We see and hear from victims, as well as both domestic and international efforts to hold the United States accountable for its actions, and stop the killings.

Seeing and hearing the ceaseless stream of news about terrorist activities and efforts to stop them has left yours truly with the feeling of the little boy in ‘The Emperor’s New Clothes.’ The mainstream reports focus on Islamic leaders and organizations, and not on the political and economic support of the destruction and killings. By generating more political support for the perpetrators, the ‘whack-a-mole’ strategy exacerbates terroristic activities rather than diminishes them. The Emperor may not have any clothes, but he sure has a lot of weapons.

In an attempt to understand this conflict I have come to the conclusion Col. Wilkerson states at film’s end. We have created the perfect enemy—the perfect justification for non-stop war.