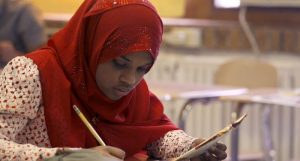 There are 22.5 million refugees worldwide, over half of which are under the age of 18.

From the Filmmaker: Day One follows a group of teens from war zones in the Middle East and Africa, as they are resettled in St. Louis, Missouri, and enrolled at a unique public school for refugees-only. Traumatized upon their arrival—having survived war and years in refugee camps—the kids are guided through an incredible program of healing, PTSD intervention, education and adjustment by the school’s passionate and talented educators, some of whom have chosen to live with their families in the inner-city in order to be closer to their students.

Our featured teens come from Somalia, Afghanistan, the Congo, Iraq, and Syria. Some have lost one or both parents, have been unable to attend school for years on end, and have suffered war traumas. These students and their families are faced with economic, language, psychological and cultural challenges, sometimes dangerous living conditions, and the U.S.’s turbulent anti-immigrant political climate. Filmed over the course of a year, we watch the kids progress through their layers of grief and loss as they attend school, forge new friendships, and prepare to be mainstreamed into “regular” public high-school with the support and mentorship of their unbelievably compassionate teachers and advocates. Their triumphs and tribulations all unfold with St. Louis as the backdrop: a rust-belt city in decline that has taken the bold step of welcoming immigrants as a solution for their growing socio-economic problems.

Nahed Chapman New American Academy is a two-year transitional K-10 public school. The school’s name is in honor of its beloved founder, Nahed Chapman, an Egyptian immigrant. She died prematurely in 2013. Students who complete the program have automatic acceptance to one of several high schools in the St. Louis area. Since the 1990s, St. Louis, Missouri, has resettled thousands of Bosnian, Vietnamese, African, Asian, and Middle Eastern refugees. There are 56 languages represented by these refugee immigrants. Ironically, rather than taking jobs away from St. Louis citizens, it was discovered that this educational program benefits the local economy.

Day One was filmed during a one-year period of time. Donnie Harris was the Principal. Seeing her commitment and dedication to this very challenging job, and how much she was beloved by her students and staff, it seems Harris stepped fully into her predecessor’s shoes.

Two very big events happened during the year of filming: The Trump administration’s implementation of a policy to severely limit the acceptance of middle eastern people into the United States, and Donnie Harris’s announcement that she was moving on in her life. Prior to Trump’s restrictive policy, the United States accepted 150,000 refugees annually. The figure is now 15,000.

All of the above sets the setting of this story of suffering yet grateful children finding a new life, affording them new opportunities. We hear and learn from both the school’s children and the staff. We empathize with the children as they deal with challenges of language, culture, trauma—and hope and success. Of necessity, the students live in an economically challenged area. A measure of the staff’s commitment to these children is the above-mentioned choice of some staff members to relocate their families to this impoverished area with its inevitable inner-city violence.

Kudos to filmmaker Lori Miller on directing her first feature documentary film. Day One is a well produced, thoroughly engaging and inspiring film that highlights the very best of humanity.

The film is making or has made its Bay Area premier at the UNAFF 2020 International Documentary Film Festival, October 15 – 25.

The schedule is now online at: http://www.unaff.org/2020/schedule.html

Link for tickets is: http://www.unaff.org/2020/tickets.html