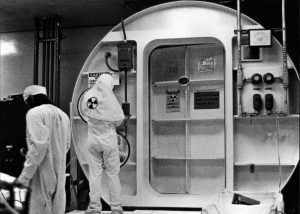 This is not a review, rather it is a notice about the restored version and how imperative it is for us to remind ourselves of the non-stop apocalyptic realities of nuclear power.

The film was written and directed by Chris Beaver and Judy Irving, and narrated by Judy Irving.

It’s been 75 years since the start of the Atomic Age, with the U.S. nuclear bombing of Hiroshima and Nagasaki killing hundreds of thousands of civilians, but its trail of destruction has never ended.

‘Dark Circle’ covers both the period’s beginnings and its aftermath, providing a scientific primer on the catastrophic power of nuclear energy while also relating tragic human stories detailing the devastating toll radioactive toxicity has taken on people and livestock – focusing in large part on Rocky Flats, Colorado, whose plutonium trigger facility infamously contaminated the surrounding area.

Academy shortlisted for Best Documentary and a National Emmy winner, ‘Dark Circle’ is no less potent today than it was 40 years ago. The new 2K HD Restoration done at FotoKem was assisted by the Academy Film Archive and supervised by co-director Judy Irving.
_______________________________

‘Dark Circle’ is one of the most horrifying films I’ve seen, and also sometimes one of the funniest (if you can laugh at the same things in real life that you found amusing in Dr. Strangelove). Using powers granted by the Freedom of Information Act, and sleuthing that turned up government film the government didn’t even know it had, the producers of this film have created a mosaic of the Atomic Age. It is a tribute to the power of the material, and to the relentless digging of the filmmakers, that the movie is completely riveting.”
Roger Ebert, Chicago Sun-Times
_____________________________________

When I set out to make a personal film about the impact of nuclear weapons and power on ordinary people, I had no idea that the movie would create such a ruckus, or that it would still be so relevant 39 years after its release. My aim was to point the camera away from experts and politicians, and find stories about how plutonium is affecting us, even in the absence of a nuclear war. Those effects are not only physical, but psychological and spiritual as well. Having grown up under this nuclear cloud, I wanted to show how nuclear power and weapons are in fact the same industry, despite government propaganda that urges us to see them as separate.

Part of understanding this industry required that we travel to Japan to film interviews with survivors of the atomic bombings. We were astonished to discover that we were the first American film crew to do so. American writers and still photographers had been to Hiroshima and Nagasaki before us, but no documentary film crew until we arrived in 1979. To me, this spoke volumes about how much guilt and denial we bring to the issue.

After its theatrical release, ‘Dark Circle’ was accepted for a national broadcast on public television, but then PBS gatekeepers broke the contract. Claiming we were not objective, they insisted that we cut a sequence in which we name the corporations that build the hydrogen bomb, such as General Electric, whose slogan is, ironically, “We bring good things to life.” Many of these corporations are PBS underwriters. We refused to cut the Arms Convention sequence and fought the obvious censorship. It took seven years before PBS finally created a new series, “POV,” to showcase films with a strong point of view, and when ‘Dark Circle’ was broadcast it won a National News & Documentary Emmy – for PBS!