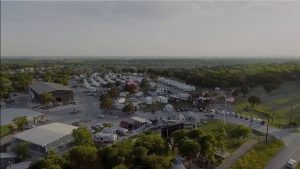 “Community First! Village is a 27 acre master plan community designed specifically to lift the chronically homeless off the streets of the Austin [Texas] area, into a place they can call home—heal from the ravages of living in the streets, rediscovering a purpose in their life, and then going out, and beginning to care for others in the world.

Layton Blaylock’s Community First, A Home for the Homeless presents a compassionate, sustainable, and comprehensive response to homelessness in the United States—the aforementioned Community First! Village.

Based in Austin, Texas, the Village is organized under a service organization called Mobile Loaves & Fishes which also includes two additional organizations—Truck Ministry and Community Works. As you may read from the website, there are a host of services provided to the formerly homeless by these three organizations.

Blaylock interviews formerly homeless people at the Village, along with the many service providers who live and work there. As the film’s host, Graham tells his personal story of the inner transformation that inspired his leadership and its many initiatives. We hear directly from the formerly homeless, as well as the people serving the many programs of Mobile Loaves and Fishes. As they speak, a living vision is formed of a vibrant, growing community that is really a community—not just a development—based on care, service, cooperation, and love.

And, it is not just the formerly homeless who benefit. The many people supporting this comprehensive initiative are finding meaning and gratification supporting this thriving community.

As I learned of the workings of Mobile Loaves & Fishes, heard the stories of the people involved, and plans for the continued growth of this community, my jaw dropped, I became amazed, awestruck with the love, intelligence, and skills behind the creation of this community.

This story of human compassion and care Blaylock has cinematically told highlights the urgent need for documentary films. It was by pure chance that I found this film. Mobile Loaves and Fishes should have made the mainstream news—perhaps it may eventually do so. Yet, we do have this expertly shot and edited film to see—and, especially, to share.

Blaylock has also produced what I consider to be a companion piece to Community First, A Home for the Homeless called Art from the Streets about a program that supports formerly homeless people to create and market art at their annual exhibition.

Community First: A Home for the Homeless is a production of infernoFILMS