But, we already know that. 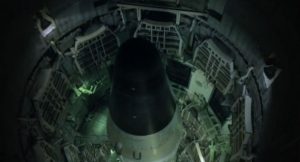 One point that can be surmised from Robert Kenner’s Command and Control is yes, be horrified, but, no, don’t be surprised when there is an accidental detonation of a nuclear weapon on U.S. soil. I know, I know, a terrorist attack is also possible, but that’s another story.

Kenner’s film is an outline of a 1980 accident at an Arkansas-based Titan II missile complex. (William Jefferson Clinton was Governor at the time.) A worker used the wrong tool during maintenance of a missile, a fuel tank ruptured, and after many hours of confusion and panic which included mistakes made by the Strategic Air Command base thousands of miles away, the leaking fuel combusted. At least one crew member died, many were injured, and many were blamed and victimized by their Air Force leadership.

The film is a reminder. Yes, there have been plenty of nuclear accidents associated with non-military use, but our arsenal is still here—on the ground, in the air, and under the sea. (Are there weapons in orbit?)

In addition to covering this tragic accident, Kenner weaves information about the history of our arsenal into his film which, per usual, is another documentary covering a woefully under-covered issue of life and death which, in turn, is under the command and control of our government.

Like Ron Howard’s Apollo 13, Command and Control tells the story of a barely averted tragedy—the possible detonation of the largest nuclear weapon in our nuclear arsenal—the end of which we know, yet we are captivated by the story, and haunted by the impact it had on its players.

This story deserves the same high-budget treatment by Hollywood as given to Apollo 31. Our obsession with ‘defense’ and its countless and limitless weapons, however, will probably stymie any possible producers from initiating such a much-needed movie.

But, we have Command and Control, and it’s easy to find. You can stream it from its website, iTunes, Amazon, or Netflix.

BTW: Nuclear safety is an oxymoron.