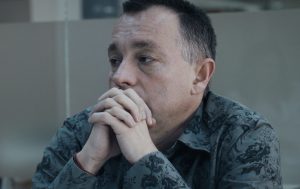 On October 30, 2015, there was a fire at the ‘Colectiv’ nightclub in Bucharest, Romania. The fire killed 64 young people, and injured 146 more. Of the 64 people killed, 38 died in the hospital—not from their fire wounds, but from massive amounts of hospital-born infections.

There are several heroes in Alexander Nanau’s Collective, I want to focus on three of them: Tedy Ursuleanu, Catalin Tolontan, and Vlad Voiculescu.

All three characters are seeking justice and an end to deeply institutionalized corruption throughout the nation. Much of the film’s focus, though, is the attempt to stop the diluting of sanitizing liquids which caused the deaths of the 38 hospitalized victims. This sanitizing issue is, of course, the tip of this ongoing healthcare iceberg.

In the midst of the reformers’ efforts, I became amused when we hear a loud Jeanine Pirro-like woman on TV expressing a non sequitur concern about lung transplants. I fell into FOX News land with this transparent attempt to distract from the nation’s endemic corruption. And, I was also bemused by the ironic name of Romania’s ruling party: The Social Democratic Party.

As of 2019, Romania is second to last in the Corruption Perceptions Index as reported by Transparency International.

Collective is a very well-produced documentary film which evokes the corruptions in our own country. The film is the number one pick in the Rolling Stone list of the best twenty movies of 2020.