This story transcends geographical boundaries, racial boundaries, socio-economic and cultural boundaries. Although the film’s title denotes completion, this is a film about many beginnings. 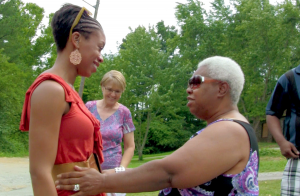 Closure is Bryan Tucker’s first feature documentary film. Quickly we see he is a natural-born filmmaker.

Angela was born of African-American parents in 1985, in Tennessee, and diagnosed at birth with plastic quadriplegia—the doctors said she would never walk. Angela was placed in foster care, and a year later adopted by a loving Caucasian couple from Washington state. Angela became part of a large family—her adoptive parents love children, and all but one are adopted.

At a certain point in her young adulthood Angela decided to find her birthmother. This understandable initiative had powerful emotional repercussions for all concerned. We take several trips between Washington state and the Deep South, and experience the creation of many strong cross-continental family bonds. Get out your handkerchiefs.

Tucker tells this story of many twists with the aplomb of a veteran filmmaker.

Closure is a thoroughly engaging, charming, and gratifying story.

The film is easy to find. Just start right here.