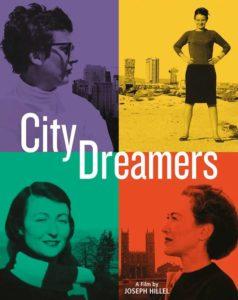 Directed by prolific filmmaker Joseph Hillel, City Dreamers profiles the above mentioned four who, at the time of production, were between the ages of 87 and 97—and still active.

Denise Scott Brown, Phyllis Lambert, Blanche Lemco van Ginkel, and Cornelia Hahn Oberlander are icons—if not legends—in the worlds of architecture and urban planning. With this brilliant documentary their renown is expanding. (See links below to learn more about each of them.)

The women provide a bit about their life stories, but primarily they focus on their professional experiences, passions and values. They were pioneers in incorporating social and environmental concerns into their work, and in confronting the men’s club called architecture.

Hillel accompanies their stories with a dizzying, engaging, onslaught of archival and contemporary images from the early twentieth century to the present.

Jean-Olivier Bégin’s soundtrack perfectly captures the cool jazz of 1950s mise en scène. If the producers release the soundtrack, yours truly will be their first customer.

City Dreamers is a masterpiece of documentary filmmaking which deserves multiple viewings—and an Oscar nomination.

The film premiered October 20, 2019 at the Architecture & Design Film Festival in New York.

Here is more information about the four women: