Directed and edited by the filmmaking team of Tina Mascara and Guido Santi, Chris and Don: A Love Story documents the epic 30-year love story of Don Bachardy and Christopher Isherwood. Bachardy is a prolific portrait artist, and Isherwood, the legendary writer whose book, Berlin Stories, was the genesis of the 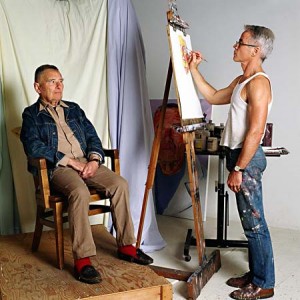 Although the age difference between the two men, thirty years, is dramatic, the deep significance of their relationship – that which justifies this expertly-produced film – is nothing more or less than then the bond of love which the they shared.

‘Touching’ and ‘moving’ are words commonly found in the many reviews of this 2007 Zeitgeist release. I find myself so touched and moved by Santi’s and Mascara’s coverage of the individual and bonded lives of these two gentlemen that I have little to say other than I agree with the avalanche of well-deserved praise the film has received, and I whole-heartedly encourage you to experience this relationship.