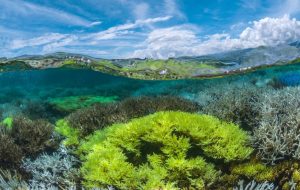 Jeff Orlowski is a master at making films with images that are as exquisitely beautiful as they are horrific. With 2012’s Chasing Ice he covers the melting of glaciers and ice caps, and now with Chasing Coral he covers the global die-off of the sea creatures we call corals.

In Orlowski’s film we learn that without reducing—if not reversing—global warming, the class of animals called coral will disappear in 30 years. This is more than a loss of these creatures, it is the destruction of one of the Earth’s fundamental ecosystems. With the increasing rate of global warming, I would not be surprised to see that 30-year figure sadly reduced.

The film focuses exclusively on the deleterious effects of rising ocean temperatures; but, from watching other documentaries about our oceans I’ve learned that the oceans are also absorbing more carbon dioxide which is acidifying the water. This chemical process is adding to the deaths of coral reefs.

Most of Chasing Coral covers the work of eco-heroes capturing images of this die-off. The cinematic technology is fascinating, the challenges are daunting, but as can be seen, the images are gorgeous, yet the stories they tell disheartening.

But, Orlowski did not put his heart, soul, and filmmaker’s mastery in this film to discourage. He wants us to change, and concludes his film with initiatives to bring more public attention to this loss and ways to stop it. Of course, that’s what I want, too.