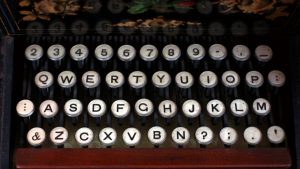 Doug Nichol’s California Typewriter has been covered by Time, Newsweek, The New York Times, The Los Angeles Times, and The Hollywood Reporter—amongst many other publications. The film deserves this adulation. It is a masterpiece.

Nichol has taken an obscure topic, brought it to life, and told many stories along the way.

The film’s subjects surround a central one: A typewriter supplies, repair, and sales shop in Berkeley, California, called, of course, California Typewriter—one of the very few such shops in existence in the United States, owned and managed by Herbert L. Permillion, III. Around this focus is a cast of characters each of whom is in a passionate relationship with typewriters. They wax philosophical about the typewriter—its history, its virtues, and the meanings of the machine’s apparent obsolescence.

Here is a sample of what you may see and hear:

Tom Hanks who, if this acting thing doesn’t work out, can easily be a highly successful typewriter salesman. He’s already entered the profession in co-creating the Hanx Writer.

Jeremy Mayer makes sculptures from typewriter parts. He and Permillion roam flea markets in quest of typewriters. They support each other in securing the right typewriter at the right price.

The late Sam Shepard speaks of his exclusive use of typewriters in writing his stories.

Silvi Alcivar is The Poetry Store. Customers bring topics to her, and she types out instant poems. Silvi is able to create them only with her typewriter.

The Boston Typewriter Orchestra emulates The Who’s Pete Townsend by, on occasion, including the destruction of a typewriter on stage. I truly hope the band and the typewriter sculptor get together.

California Typewriter is a delightful experience.