student-athlete (n): an unrecognized profession where pain and gain are mutually exclusive. 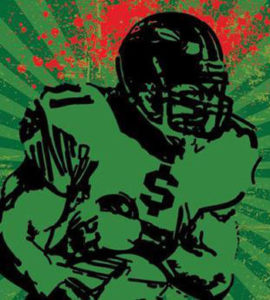 There are a fount of adjectives to describe college sports in the United States of America: Unjust, Immoral, Unethical, Dangerous, Risky, Unhealthy, Tragic—and having just viewed Bob DeMars The Business of Amateurs—add the noun, Travesty.

There has been no want of news reports over the last few years or decades about injustice and danger in college athletics. Yet, in our world beset by massive challenges, this injustice—like so many others—is easy to ignore. That’s where documentary films come in, where Bob DeMars comes in.

In just 90 minutes DeMars, a veteran player of college athletics, covers the dangers of football—with the understanding that any athletic activity harbors the risk of injuries, some devastating.

After a brief outline of the history of athletics, we learn the extent to which United States players are exploited and abused by the NCAA and member school policies. Players risk their health, well being, and lives. If injured they lose their four-year scholarship. They don’t receive the health care they need during and after their college career. They are disallowed from exploiting their own success on the field while the schools and coaches take great advantage of same. Those students who want to take their academics seriously don’t have time to do so. Regarding football, the NCAA has dragged its feet in implementing safety procedures adopted by the NFL.

DeMars does what can’t be done in mainstream media. He provides detailed information, gut-wrenching human tragedies, and notes attempts to improve the lot of college athletes.

These are our children. Athletics can provide opportunities for a meaningful rewarding career. They also maim and kill, and leave players destitute.

The Business of Amateurs is distributed by Kino Lorber.