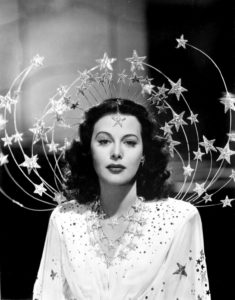 Written and directed by Alexandra Dean, Bombshell is a straight-forward cinematic biography of Hedwig Eva Maria Kiesler, also known as Hedy Lamarr. Although there are several biographies about Lamarr, her life has not been covered in documentary form.

There is an inciting incident in the production of this film—the one-in-a-million chance discovery of four audio tapes of Lamarr speaking of herself. A gentleman by the name of Fleming Meeks—a journalist who responded to Dean’s world-wide call for any biographical information directly by Lamarr—is the back-story hero in this film. Dean carpets her film with interstitials of Lamarr’s voice derived from these tapes.

A strong character, and way ahead of her time, the famous and infamous actor had more than her fair share of tragedies. She seems to have weathered them all, including the most expensive one—the loss of her patent that could have and should have netted her about three hundred million dollars.

Lamarr’s secret life was that of a frustrated scientist/engineer. Together with her composer, George Antheil, she conceived something called ‘frequency hopping’—an electronic phenomenon that enables secure, wireless electronic communications. The patent was absconded, of course, by the United States government. Frequency hopping is foundational to virtually all the world’s electronic communications between and amongst devices and people.