“Those mountain people who have been shut out of the world all these years, I know them. If I live…perhaps we can do the justice they deserve.” Abraham Lincoln 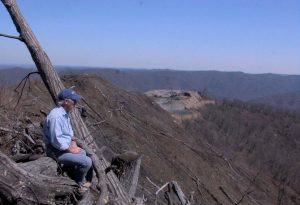 You go to the bottom of the website for Mari-Lynn C. Evans’ Blood on the Mountain and you find a section called ‘Partners.’ Beneath that section’s name is a list of 35 environmental, labor, and justice organizations supportive of the film’s production and distribution. This measure of support has helped create a standard bearing documentary about the history of coal’s impact on the people of West Virginia.

The film covers more than a 150 years of economic and environmental exploitation and the subsequent damage to the state’s land and people. Evans describes what appears to be a Balkanization of a State in order to create a single-industry economy and a brainwashed population with mental blinders to the massive forces dominating, controlling, and destroying their lives, land, and environment.

The film’s structure is built on the many accidents that have occurred in the mining of coal, and the tepid responses to those ‘incidents.’ Within that structure we learn about how the people’s lives have been impacted, introduced to a few of the perpetrators, and hear from authorities and experts about the massive tragedy that is West Virginia.

Although the film is not about the global environmental impact of coal extraction and use, it serves as a microcosmic view of how humanity has destroyed and continues to destroy the very sources of its existence.

Blood on the Mountain is a bitter pill—and would not, could not have been a powerful, captivating film if it were not so. It is documentary film at its best, and can make a difference in our future dialogs about coal, politics, and our ecosphere—if we watch it.

Sorry, Abe. Justice has yet to be done.

In addition to iTunes, Blood on the Mountain is currently on Netflix.