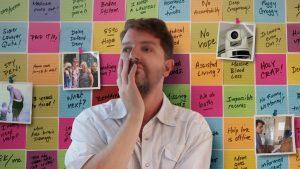 Written, directed, and experienced by Steve Burrows, Bleed Out is another scathing indictment of the United States’ greed-driven healthcare system. In his HBO documentary Burrows tells the story of his mother, Judie, a retired school teacher who was living a vital, active senior life.

Judie had a fall, went in for a partial hip replacement, and ended up in a coma, with brain damage, followed by a stroke. Burrows, a Los Angeles-based performer/writer/producer/director, is as caring a son as any mother could have. There were medical mistakes starting from Judie’s very first procedure. The loving son decided to dare the odds, and began a 10 years-long Sisyphus-ian endeavor for accountability, justice, and to have Judie’s medical and care-giving expenses covered.

According to the National Center for Health Statistics, medical error is the third leading cause of death in the United States. Bleed Out addresses this non-stop tragedy. Burrows’ passion engages viewers immediately and never lets go.

It will take a whole lot of voters to support enactment of substantive healthcare reform. Find your way to this documentary, share it far and wide, be part of the solution.