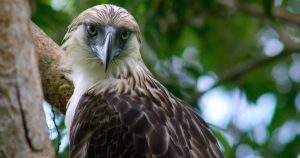 Eric Liner’s Bird of Prey covers herculean efforts to save the endangered Philippine eagle. There is very little old forest left in the Philippines. Consequently, the numbers of this magnificent avian creature are estimated between 100 and 800 individuals.

Neil Rettig is the film’s central human character. In 1977, he provided the first moving images of the Philippine eagle. The current film is peppered with shots from that footage. Most of the film covers Rettig and team’s recent return to find and film the eagle again, as well as to cover Philippine-based conservation efforts.

The film’s cinematography is exhilarating, but I’m inured to excellence in nature photography and cinematography. I am, however, in awe of the balance achieved by Bird of Prey. The majority of environmental documentaries provide disturbing, if not horrific, information about and images of our destruction of the Earth’s ecosphere—followed by cold comfort, a little something you can do.

At the moment there is not enough forest to support the numbers of individuals it takes to sustain the Philippine eagle population, and it is not clear what can or will be done. But, efforts are being done, and the filmmakers provide a significant amount of coverage to those Philippine-base initiatives. Let it not go unsaid that this film is also a monumental effort to bring attention to the Philippine eagle.

Adding up the beautiful cinematography, the skill and danger required to capture this very rare footage, and the carefully balanced editing, I do not hesitate to say that Bird of Prey is a masterpiece of documentary filmmaking. I truly hope that the film finds a monumental audience.