“This movie has good music, kinky stuff, a cute cat, romance, drama, and is definitely not normal.” Michelle Smith 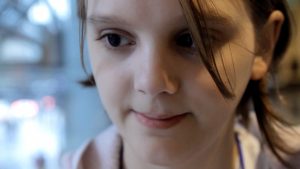 Director Garrett Zevgetis has had his first feature picked up for theatrical distribution—a rare accomplishment in the documentary film world.

In Best and Most Beautiful Things Zevgetis follows Michelle Smith for a period of time in her young adulthood. Smith has more than the usual challenges, though—she is legally blind. Now, that term is quite open to interpretation—let’s just say she is very legally blind. Smith has also been diagnosed with Asperber’s Syndrome—one of the more famous forms of something called The Autism Spectrum Disorder.

Zevgetis’ coverage includes Smith’s family: mother, father, three brothers, and, of course, the cute cat. Her parents are divorced, and she lives with her mother.

Slice-of-life stories, fictional or non-fictional, can be challenging to remain engaged with—especially in our cyber age. I found myself fully engaged with Michelle Smith—her presence, her character, her story, and the courage she displays as she struggles with multiple barriers and, most challenging—the world telling her who she is.

Stay in touch with the film’s website and its distributor’s, First Run Features, to find your way to this most gratifying story.