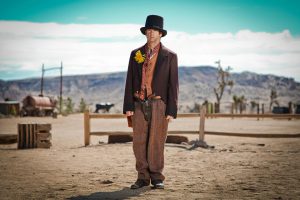 Directed by Michael Barnett, Becoming Bulletproof is a documentary film that follows the production of a western movie entitled ‘Bulletproof’ which features a cast of disabled actors some of whom are severely disabled. The movie’s production is part of the activities of the Vermont-based collective called Zeno Mountain Farm.

Once a year Zeno produces a film in southern California. The cast of disabled actors fly in from around the country—some have performed in several films.

As Barnett follows the production from writing, to wrap party, to premier, we hear from both the production crew and the cast. Our lead character emerges naturally: A. J. Murray. ‘AJ’ is in a wheel chair, has little control of his arms, yet excels at personal insight and expression. AJ speaks of his life with cerebral palsy and his thoughts and feelings about being an actor. As he does so, he’s speaking to a degree for the entire cast.

The film’s message is movingly clear: There is inestimable value in integrating differently-abled people much deeper into our lives, our culture.

Becoming Bulletproof transforms the way we view, treat, and support disabled people. This is an absolute must-see film.

Indiewire reports that Becoming Bulletproof has been picked up for distribution by Virgil Films. Stay in touch with the film’s website to find out ways you can see the film.

I hope to hear a lot about Becoming Bulletproof come Oscar season.