HBO’s Banksy Does New York  is yet another shameless attempt to exploit the phenomenon of ‘Banksy,’ a faux character created by a small group of artisans and their enablers. Given the success of the first major film about this composite character called ‘Banksy’ (Exit Through the Gift Shop), and given the media might 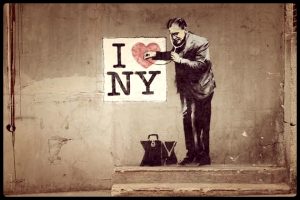 of HBO (coincidentally based in New York City), the film is likely to recoup its costs and maybe make a few people a few dollars richer.

Do you want to buy in to this cultural phenomenon that offers fodder to justify the existence of news media, art critics and galleries, self-appointed iconoclasts, and filmmakers?  Shall we support an entertainment for them to focus on instead of the grotesque population growth of our human species, most of whom live and die in deplorable conditions (and all of whom are contributing to the specie’s destruction of its own environment)?

Isn’t it time for our creative types to come up with brilliant ways to make the deplorable news more engaging? Can’t we find ways to educate people to the needs of our species in far-flung places without pitiful images and dour predictions? Why can’t these ‘geniuses’ come up with something better than covering the story about the story of a first-world phenomenon?