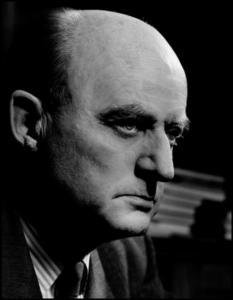 An American Conscience is an hour-long documentary introducing the work and—especially—person of theologian Reinhold Niebuhr. The inspiration for this documentary is both the power and impact of Neibuhr’s expressions, and the filmmaker’s intention to expand awareness of this Protestant minister’s influence on 20th Century American history.

In this short one hour, writer/director/narrator Martin Doblmeier provides an outline of Niebuhr’s biography, highlights his impact on the worlds of theology, as well as on the public dialog about American national and international policies in the 20th century.

Hal Holbrook voices Niebuhr, and Doblmeier includes interviews of twelve prominent thinkers including Dr. Cornel West, President Jimmy Carter, Susannah Heshel, and Andrew Young. All speak of Niebuhr’s influence on their thoughts and perspectives on freedom, ethics, morality, and, of course, religion. Heshel is the daughter of theologian Rabbi Abraham Joshua Heschel who was fast friends with Nieburh for many years, and presented the eulogy at Nieburh’s funeral—at Nieburh’s request.

The two theologians, seemingly on opposite sides of the impenetrable theological barrier between Christians and Jews, spent countless hours in dialog. The moment that bit of information was offered by the film, I found myself aching to have transcripts of those dialogs.

Warning: Seeing this film may have serious side effects—including the reading of Niebuhr’s books. I found myself most intrigued by the title, The Irony of American History.

Reinhold Niebuhr is the author of The Serenity Prayer.

An American Conscience is a First Run Features release.