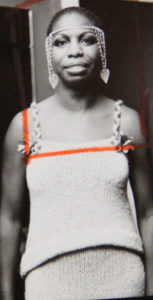 “With her voice, with her presence—whether it was silence, staring at the audience—she was challenging. Anyone who has experienced alienation finds a little bit of comfort in her music, and in her style, and in her courage to say what she wanted to say always—and never back down from it.” Kevin Allred, Professor of Women’s and Gender Studies, Rutgers University

Stunning—the critic’s go-to cliché when a film strikes so deep that the feeling of being changed by a film is impossible to describe. I reluctantly surrender to ‘stunning’ in describing the experience of seeing Jeff L. Lieberman’s The Amazing Nina Simone.

Lieberman tells the story of Simone’s triumphant and troubled life from birth to death. The over-arching tragedy is Simone’s untreated mental illness. Her ultimate triumph was her ability to suppress or transcend the wounds of her upbringing and give our world a lifetime of beauty. In less than two hours, Lieberman powerfully conveys Simone’s pain, raging talent, and complex character.

Lieberman wrote, produced, directed, shot, and edited his film. A filmmaker’s heart and soul is obvious to see in the documentary films I review. The loving connection with a film’s subject is rarer to find, and that connection between filmmaker and subject shines throughout viewing The Amazing Nina Simone.

(I was delighted to see and hear interviewee Eric Burdon in such fine form.)

Please see the film’s website to learn about screenings and the home video release.