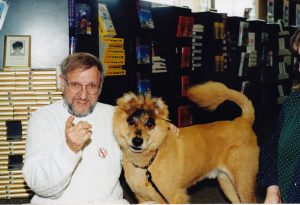 A 15 year old runaway teenager who went by the street name of ‘Baby Girl’ was given a puppy—a Chow/Husky mix.

Doug James, an adjunct professor of communications arts at Spring Hill College, became the second owner of this puppy. He is telling parts of the story of the dog named Gucci.

Shauna Cooley Busby (Baby Girl) was in a bad crowd of boys who eventually were demanding sexual favors of her, which she refused. In retaliation the boys hung the 12 weeks old puppy from a tree, and were slapping him, and then set the puppy on fire.

James was outside his next-door home when he saw this puppy on fire.

Busby, crying deeply, asked James to take the wounded dog to the vet. At first James brought the puppy to his home, expecting him to die that night. The next morning James brought the puppy to Dr. Ann Branch’s veterinary clinic. She could smell the lighter fluid still on the dog. In interview Branch said “nothing can prepare you for something like that. You think you’ve seen it all—you haven’t.”

Word got out. An anonymous attorney offered to pay for the puppy’s vet bills. The puppy was treated by Branch, had surgery at Auburn University, and became a cause célèbre. The team of Doug James and his ambassador dog Gucci catalyzed the beginning of a healing that would spread throughout the United States of America.

Gorman Bechard’s A Dog Named Gucci tells the puppy’s miraculously long story, and stories of that ilk of many more dogs. His film is about the abuse of dogs, of course, and how this one puppy’s horrific abuse catalyzed a movement for criminal justice consequences for abuse of dogs and cats. Every State now has some version of legislation meant to reduce the abuse.

However, at film’s conclusion is the following text: ‘It is estimated that over 1,000,000 domestic animals are abused every year. Approximately 10% of those abuse cases are reported. Less than 1,000 are prosecuted.’

Bechard’s film is very well crafted, and is successful at making its plea for more protections.

A Personal Note: I found A Dog Named Gucci by accident. I was just scanning Amazon Prime for something about dogs. The film’s title intrigued me. My concerns about animals and plants runs deep, and I grieve for the abuse and destruction of all our flora and fauna. I well understand that this film is hard to take for some people, yet I hope my straight-forward outline of the story will find a few viewers, and that the film will find a few more viewers.