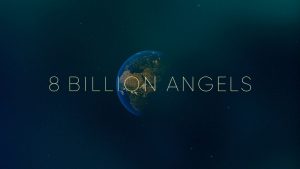 “If I just had this magic power, I would like to alleviate poverty, because when you’re poor, never mind the individual suffering, you’re destroying the environment because you have to. You have to cut down the last trees to try and grow a bit of food, to feed yourself and your family, or to make some charcoal. Or, you have to buy the cheapest food even if that did cause horrendous suffering to animals. I would like to change the unsustainable lifestyle of everybody else. We’re just greedy, and I always think about Mahatma Gandhi saying this planet can provide for human need, but not for human greed. And that is so right.

“And maybe the hardest of all, I really, really, really would love to change—without causing any pain or suffering—reduce the number of people on the planet because there’s too many of us. It’s a planet of finite sources, and we’re using them up. And that’s going to mean so much suffering in the future.”
Jane Goodall

Victor Velle’s 8 Billion Angels is the documentary film about human overpopulation I have been waiting many years for. It has been utterly obvious that human beings are responsible—through our greed and ignorance—for our own continuing demise.

Velle organizes the film in a set of major topics:

The solutions section is, of course, the most crucial. Not surprisingly, the number one solution, which has been batted about for years, is female empowerment—the most compassionate approach to population reduction. Along with distinguished interviewees, the film introduces the work of schools and organizations that promote empowerment and the impressive results of their efforts. And, we are also reminded of cultures that squelch females.

The film’s interviewees share hope that somehow or other we are going to eventually reduce overpopulation. My question is: Will the much-needed reduction be due to some form of Armageddon, or to reasonable, humane strategies which are already available if and when the world choses to implement them.

I can only hope that people will find this film, put two and two together, and participate in compassionate solutions to overpopulation.

8 Billion Angels is an Abramorama release.