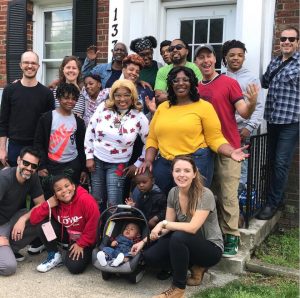 Davy Rothbart’s 17 Blocks follows two decades of a family living in a lower class neighborhood 17 blocks away from the United States Capitol building. Rothbart initiated filming, yet some of the featured characters picked up cameras and have continued documenting their lives.

The community has its fair share of drugs, crime, and occasional murders associated with under-resourced communities. The documentary follows principal characters Cheryl, Smurf, Denice, Emmanuel, and the Justin Sanford-Durant family through the challenges, losses, and gains of two decades of lives lived—all in the shadow of the power brokers 17 blocks away who could eliminate the poverty behind the drugs, violence, and stunted lives.

17 Blocks is a slice of life film that deserves a very large audience. It has been well reviewed, and received 12 festival nominations and 14 wins. Unless you have a heart of glass, your heart will be deeply touched by the film’s people and their journeys.

Kudos to composer Nick Urata who led the film score’s team which perfectly wrapped the story in delicately performed music. In my opinion, if you don’t remember hearing a documentary film’s score, you have heard a perfectly composed and performed score.

Note: Davy Rothbart is also founder of Washington To Washington—an annual hiking adventure bringing city kids from Washington, D.C., Southeast Michigan, and New Orleans on a week-long camping trip to climb mountains and explore some of the country’s most beautiful wilderness areas.